The story that won't lie down


There is a palpable frustration among local people who want to share their concerns about the redundancy of the Editor of the Tivy-Side Advertiser in Cardigan, which occurred just before Christmas.

Several people I know have written letters and all are aware that the paper has not published them, nor do they expect it to.
When the news first broke a story about the redundancy was pulled from the company’s website; and a fabulous tribute to the outgoing editor Sue Lewis, from her predecessor Aneurin Evans, was also pulled.

Aberporth resident Godfrey Green has asked me to publish his letter on this blog, where it will be seen by many local people. I am happy to do so.
His correspondence includes the text of the earlier letter from Aneurin Evans. This has already been shared widely on social media, but I include it here for the record.

Dear Editor,
You have been inundated with letters and emails from the people of Cardigan and district criticising Newsquest's decision to remove the position of Editor at the Tivy-Side Advertiser.
Despite this, you have not printed a single letter on the subject.
This behaviour is reminiscent of Izvestia and Pravda in the Soviet era.
I suggest that in future you modify the Tivy-Side Advertiser's masthead to read:
“No longer The VOICE of the COMMUNITY”.
I for one will no longer purchase the Tivy-Side.
Instead I will buy the Cambrian News because it is owned by Tindle Newspapers Ltd who have an outstanding track record on supporting local community news (remember the Tenby/West Wales Observer?).

Extract which refers to the purchase of the Tenby Observer:
Sir Ray Tindle illustrates his ultra-local philosophy by recounting to the industry trade newspaper, Press Gazette, his rescue of the Tenby Observer in 1978 after reading in the Daily Telegraph that the paper, which had been renamed the West Wales Observer in an attempt to reach a wider market, had ceased publication.
After buying the paper from the liquidator, he revived the old name and told staff to throw out any story that was not from Tenby. "The West Wales Observer covered everything from Carmarthen to Haverfordwest, and it had failed. I told the staff I only wanted news of Tenby and I wanted to go back to the old title."  Sir Ray says the Tenby paper made well over £100,000 in 2007 and sales have more than doubled since he saved it.
There was another reason Sir Ray wanted to save the Tenby paper. He knew that in 1908 the paper's editor had led a campaign which resulted in the passing of the Admission of the Press to Meetings Act. Today the Tenby Observer carries the proud slogan "pioneer of press freedom" under its masthead.

You will see that a tribute, made on December 18th, from Sue's predecessor has been removed from the Tivy-Side website.

This is the original tribute from Aneurin Evans:

“It was with deep regret and sadness that I learnt this week of the 'death'
of a local Editor. Forgive the funereal tone, but news of the imminent
demise of this vital role at the Tivy-Side Advertiser spells yet another
nail in the coffin of a local institution which has served its readers with
distinction for nigh on 150 years as the undisputed Voice of the Community.
Most communities have more than one headmaster, more than one manager, more
than one doctor, but more often than not, there is just one Editor. And the
role of an Editor is a special and privileged one. He or she is responsible
for the overall content of the paper, makes sure everything runs to plan
and has the final say on what appears in the paper.
The decision by owners Newsquest to strip the Tivy-Side of its Editor is
not only a blow to the paper and its current incumbent (who has totally
embedded herself in the community both as a top-drawer reporter and
Editor), but is also a slap in the face for the thousands of loyal readers
who support the Tivy-Side week in, week out.
The success of the paper's relentless campaign to Save Cardigan Castle is
just one example of how a local newspaper with an Editor at the helm can
initiate an award winning campaign and galvanise people from near and far
to work towards a common goal.
It's true the world will not stop because the Tivy-Side no longer has an
Editor, but a newspaper without an Editor is like a football team without a
manager or a ship without a captain. Diminishing the role belittles the
paper and Cardigan.
The paper's first Editor proudly proclaimed in June 1866 that the Cardigan
and Tivy-Side Advertiser would "intend making all mankind our business -
our native land particularly so; and our native town we shall consider
under our own particular care. Its interests, whether generally as a part
of the body politic, or locally, shall have our special advocacy; and
whatever is calculated to advance its trade, to raise its political
position, or to add to the social comforts of its inhabitants shall have
our hearty assistance." Ever since then, successive Editors have sought to
uphold those principles.
In recent years, the Tivy-Side, which not so long ago employed up to 30
people and yet yielded a healthy profit, was gradually pared down in the
interests of 'progress'. The printing press disappeared, the printers
disappeared and gradually most of the staff disappeared, sacrificed on the
altar of new technology and the cost-savings achieved by outsourcing to
England and India. It mattered not that the staff in Delhi’s knowledge of
local Ceredigion matters was somewhat less than comprehensive. But always
the battler, the Tivy-Side successfully embraced all aspects of the new
technology and continued to inform, educate and entertain.
With the disappearance of the Editor, it seems inevitable that the Voice of
the Community will be reduced to an inaudible whisper”.
Aneurin Evans
Tivy-Side Editor (1976 - 2008)

I am tempted today to invite people to come and enjoy ‘Breakfast in Bed’ with me, but I’m not that bold, although some of the poems in my ... 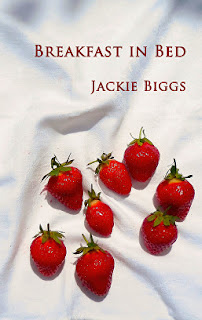 Jackie Biggs
My first poetry collection, The Spaces in Between, was published in September 2015 by Pinewood Press (Swansea). My second collection, Breakfast in Bed, was published by Indigo Dreams in September 2019 and was shortlisted in the Wales Poetry Book Awards 2020: https://www.indigodreams.co.uk/jackie-biggs/4594692749. I believe strongly that poetry often works best off the page and I read my work regularly at spoken word events all over west Wales, where I live. I have been nominated for a Pushcart Prize. I was Highly Commended in the 2019 Welsh International Poetry Competition and in the RS Thomas Festival Poetry Competition 2019. I am co-organiser of The Cellar Bards, the only regular spoken word event in Cardigan, and a member of the Rockhoppers poetry performance group. Twitter: @JackieNews